This is the plea of a poor little tropical fish. It’s very sad and we must be very quiet, please.

Ladies and germs, it’s time once again to visit that celebrated lady of song, Madame Spivy LaVoe. To the uninitiated, allow me to get you up to speed:

Spivy (1906-1970) was a lesbian entertainer, nightclub owner and character actress, Spivy has been described as “The Female Noel Coward” – to which I add “…. if he had been born in Brooklyn as Bertha Levine.” You can read earlier posts about her here:

Today we will focus on A Tropical Fish. As with the previously mentioned Alley Cat, this song was co-written by Spivy with Jill “Billy” Rainsford. Both songs were featured on the 1939 78 record album Seven Gay Sophisticated Songs By Spivy.

As with Auntie’s Face, Spivy begins this song with her trademark “It’s very sad and we must be very quiet” spoken intro before launching into the tune, which tells the story of a tropical fish writing a letter of complaint to Fiorello LaGuardia, the Mayor of New York City (1934-1945).

The butcher, the baker, the candlestick maker, the clerk and the trombone player,

The child on the street and the ultra-elite all write letters to the mayor.

But they went him one better when he got a letter from somebody’s tropical fish.

Our tank’s overheated and we’re being treated like common sardines in a can.

The way people watch us is quaint. Our privacy’s something what ain’t.

So be a good fella, my dear Fiorella and hear a poor fish’s complaint.

“To be quite specific, the food is terrific.

We’re on the hay diet – you really should try it.

It tastes like the hook – gee, I wish we could cook.

The service is lousy – we have no back-housey.

“The innocent faunas are hiding in corners

Their love life is wearing with human eyes staring…

Why can’t we have covers like those birdcage lovers?

They’re hidden each night ‘til the morning sunlight

Then brought out to bath with no questions asked.

“Dear Mayor, I’ve been very frank… but you don’t know life in a tank.

Believe me, it’s hellish and you wouldn’t relish to sleep in the water you drank.

Now here’s what we tropicals wish: Some bedrooms to give us ambish.

Lastly, here’s a syndicated article about Spivy that ran in newspapers across the country in late November, 1948. Note that her last name is mispelled “Devoe” with no mention of Bertha Levine. 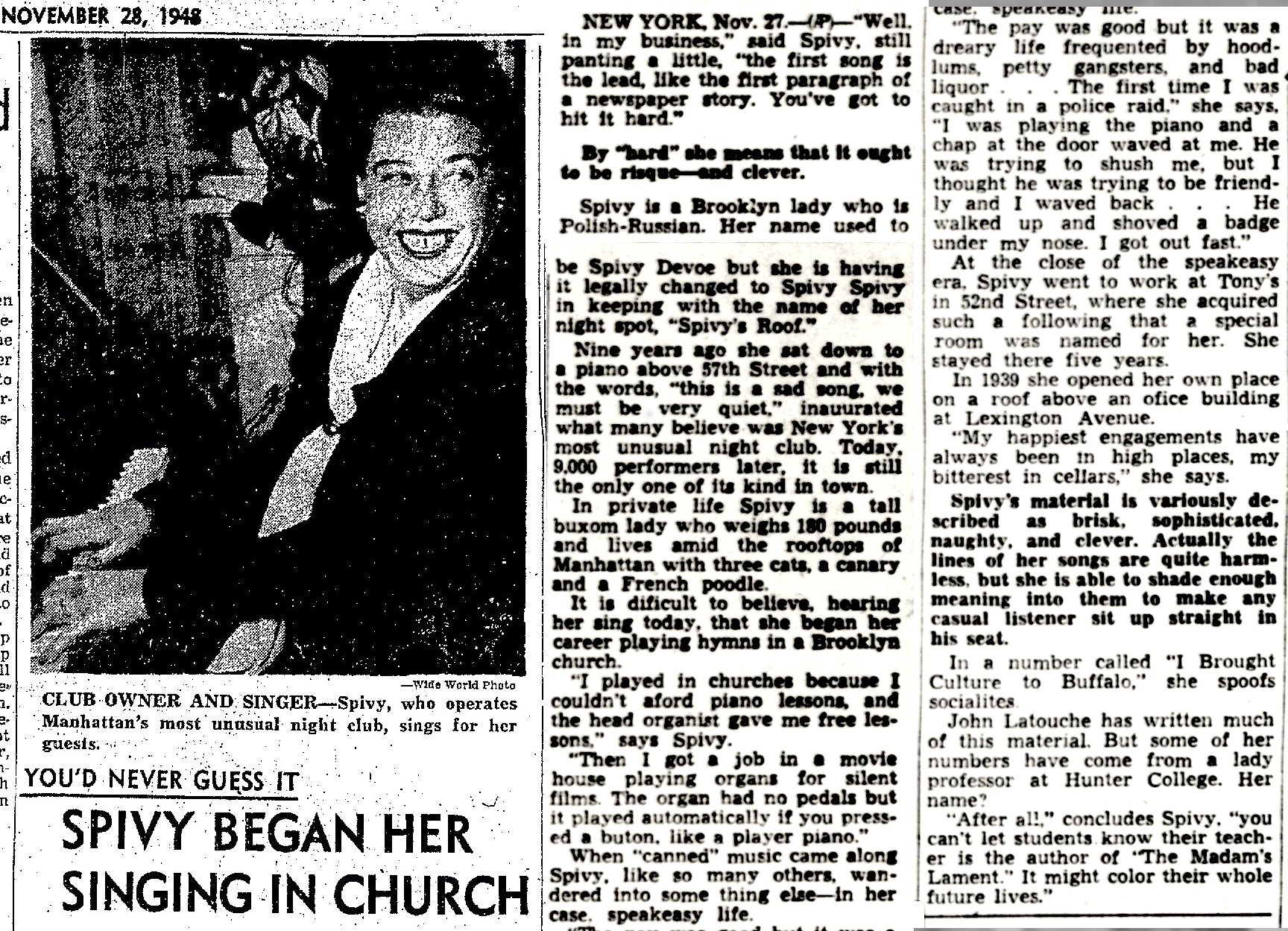